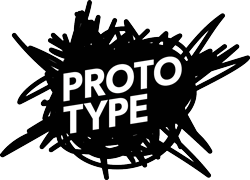 IDS Vancouver is pleased to present Prototype – a curated showcase of the next generation of designers. This feature is a juried platform featuring products not currently in production addressing new ideas for the residential market. The group of participants features professional designers and students presenting both to-market and conceptual works. 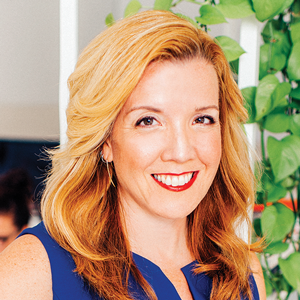 Anicka Quin is the Editorial Director of Western Living and Vancouver magazines. Under her leadership, Western Living has become a regional brand with a national reputation, winning Best Home Design and Décor Magazine from the Canadian Magazine awards this year. She sits on the board of directors of the Canadian Society of Magazine Editors and works with Magazines Canada for their professional development series. 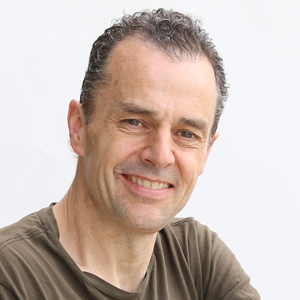 Christian Blyt is an Associate Professor in Industrial Design at Emily Carr University and Coordinator of Innovations in Wood Design. He received his MA in Interior Architecture and Furniture Design from Aalto University in Helsinki, Finland, where he presented Corelam as a patented corrugated plywood as his master thesis. His work encompasses a wide range of international experiences in different segments of the wood design and manufacturing industry. He is also the founder and creative director of Studio Corelam, a research, design, and manufacturing studio located in Vancouver, BC. 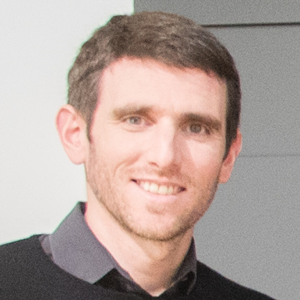 Virgile Machenaud is the Vancouver Store Manager of BoConcept, a modern Danish furniture brand for the urban-minded customer. Virgile plays an instrumental role in growing BoConcept Vancouver into one of the Top 15 (out of 260) BoConcept storesworldwide. Prior to BoConcept, he has worked with various furniture brands in Europe.

Below are the designers that exhibited at Prototype in 2017. 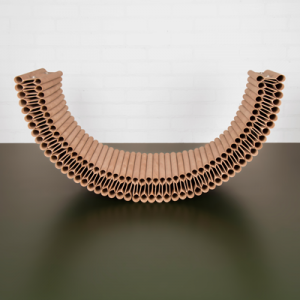 Per Meter is ‘a new form of wood.’ Veneer is typically used as an economical solution to achieve a wood aesthetic by covering substrates. Shifting towards a more honest use of the material, Charlotte Pommet and Elliot Kendall explore the potential of veneer on its own. They have developed a forming technique that relies on the properties intrinsic to each species and grain pattern. Both volume and strength are achieved by laminating minimal amounts of veneer together into structural profiles. As a result, these lightweight modules come together fulfilling infinite possibilities of designs and applications. 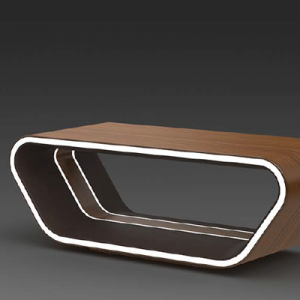 The Inbound Table is sculptural in nature, aspiring to be enjoyed well beyond its functional obligations, while upholding its duty through the tests of time. This piece is an expression of form, designed to push the limits of the material and change the emotion of the room. 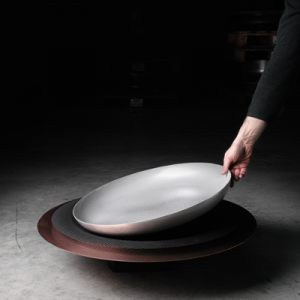 Metal spinning is a process by which a disc of metal is rotated at high speed and formed over a mould into an axially symmetric form. Most large scale companies specializing in this process focus on function over form, contributing to utilitarian objects and components, such as gas bottles and duct work. The focus of Adapting Geometries was to revisit the inventory of discontinued utilitarian geometries and find new purpose for them. The alteration of aesthetics and function is achieved by variation of material, finish and processing technique, consequently changing the relationship we have to this form. Shown on the left are trays made from sewer covers. 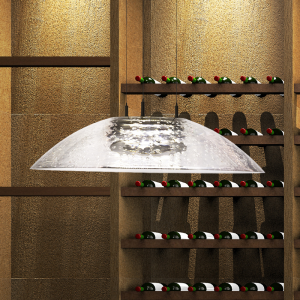 Atmosphere features a dome-shaped light guide, a super-efficient conductor and emitter of light. Atmosphere’s dome comes alive where light is the design: changing with use, transparent when unlit, being discrete and diaphanous, and translucent when lit, becoming more opaque the more intensely it is powered. 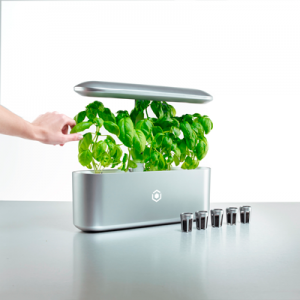 AVA is the brain child of Valerie Song and Chase Ando, a former chef. With the help of dozens of horticulturalists, engineers, and designers, they developed AVA Byte – a modern, space-saving smart garden that mimics nature to keep plants well-lit and watered, all year round. AVA Byte uses compostable plant pods to grow just about anything with a push of a button—similar to how Nespresso revolutionized the home coffee brewing industry. 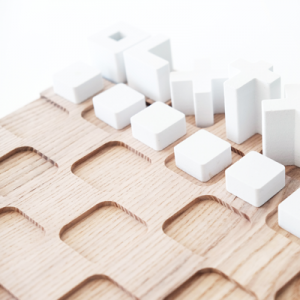 A simple take on a timeless classic. Stripped to its bare essentials, you will not find any ornament or extravagance here. From a flat slab of salvaged ash wood, CNC milled pockets add depth to define the playing surface. Subtle shadows and lighted edges catch the eye, revealing moments of exposed endgrain. The playing pieces are formed as simple extrusions; each characters profile is defined by the directional limitations of their movements. Current interations are exploring 3D printed porcelain and steel/brass/nickel/copper options for the fabrication of the playing pieces. 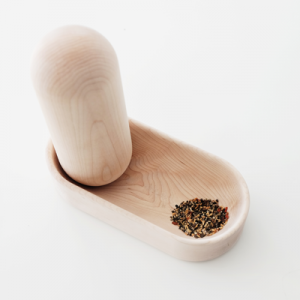 Origins’ approach to the classic mortar and pestle set is based purely on touch and feel. Traditionally these sets would be made of stone or marble, and while the weight of such materials obviously contributed to their purpose, the forms were often clunky and utilitarian. CNC milled on a small 4-axis machine, the pill shaped form of the pestle is crafted with rounded ends that fit perfectly into the curvature of its mortar and the palm of your hand simultaneously. The density of the hard maple lends itself well to the task of grinding dried herbs and spices. When not in use, the pair nests together, an object in itself worthy of your precious counterspace. 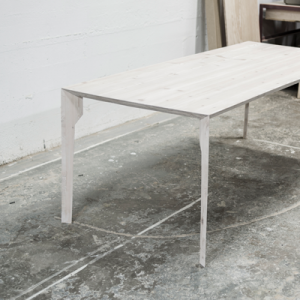 The Cross Laminated Table was designed with the intent to employ a single material to fulfill the fundamental needs of the most basic piece of furniture: a table on four legs. The entire table is fabricated from a single custom three-ply slab cross laminated timber (CLT). Alternating layers within the CLT are oriented at 90 degrees to one another, giving the panel structural capacity in two directions. The majority of the slab forms the table top, while the table legs were cut from the same original slab. A variety of leg connection options were explored, eventually settling on a three-way mitre join with matching grain transitions. 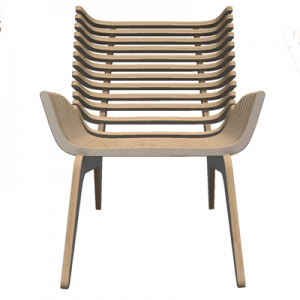 The inspiration behind the fishbone chair comes from the designers’ love of the West Coast and its mid-century sensibility. 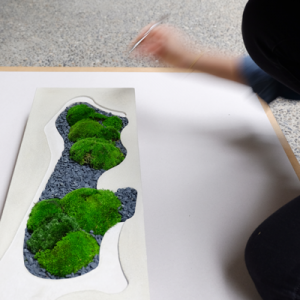 MiniZen brings the sensibility of landscape design into the scale of a living space. Unlike a potted plant, the MiniZen draws upon inspirations typically used in large scale landscape/urban space, including the ancient principles of Shakkei (borrowed scenery in Japanese), in the sense that greenery in an enclosed environment can also be understood spatially, in a transmutable scale. MiniZen is made of cast concrete with preserved moss setting against black gravel. 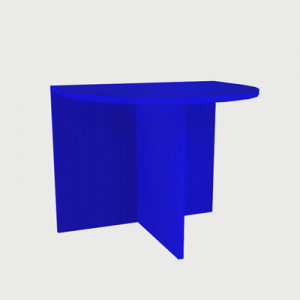 The Plane Side Table is a study in minimalistic form juxtaposed by playful use of color. Rectilinear and curve-cut planes meet to create the composition of the table. Made of painted wood, they are a simple and fun addition to any space. 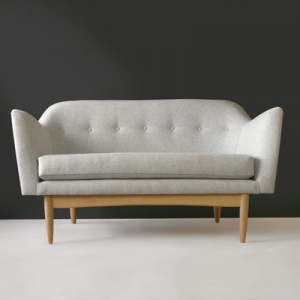 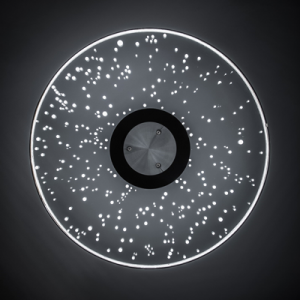 The Stellar luminaire features a completely transparent light-guide with what looks like the stars of the night sky (an actual star-map of the northern hemisphere). The stars glow and actually emit light from the fixture. Loom’s patent pending technology delivers high efficacy flux with superior light distribution, providing even light, using long life LEDs that can last a generation without changing the light source. 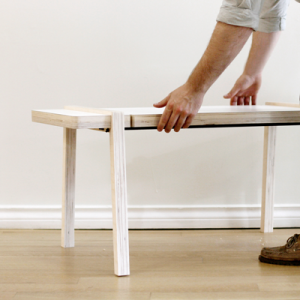 In small living spaces, furniture must have more than just one function. This is why the tea table was designed to have extra storage capabilities and people-friendly cable management solution. 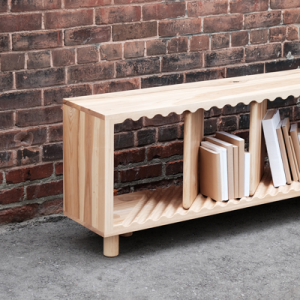 ‘Tempo’ provides a flexible new method for displaying and storing books. Employing CNC milling technologies,‘Tempo’ carves a continual series of waves into its structure. Within the troughs of these waves, partition walls slide in and out with ease, allowing the user to shift and subdivide the overall length of the shelf however they see fit. The angle of these waves let the partitions act as bookends where needed; books can either rest parallel within the waves (the smooth edges cradle books along its peaks and valleys) or stand perpendicular, bridging across them. A sense of transparency and rhythm shifts with the viewing angle, as the density of tempo’s internal space is continually redefined over time.