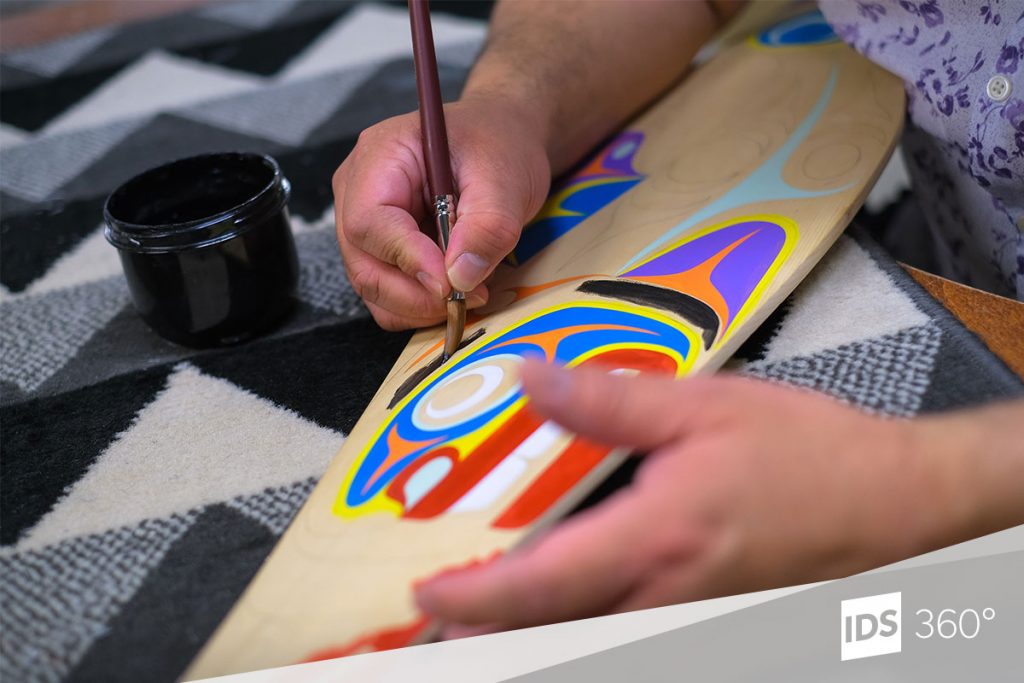 IDS 360°, presented by Volvo Cars Canada, is a new virtual series created by IDS in solidarity with the industry and designers we champion. Launched across all our platforms, it highlights handpicked, diverse brands with video Q+As, product launches, studio tours, and more. Not taking our voice and reach for granted, the national IDS platform is accessing individual designers, architects, and brands of all sizes to hear their visions, challenges, triumphs, and potential for a more thoughtful, more beautiful design practice, post-pandemic.

We are thrilled to continue the IDS 360° series with Coast Salish artist Maynard Johnny Jr. IDS Vancouver director, Jody Phillips’ 1st purchase back as an art student, working as a gallery assistant was Maynard’s 1993 print, ‘Spring is Coming’. 20 years later, Jody and Maynard sat down to talk ancestry, design, and how this pandemic, some twenty years after Jody was first introduced to Maynard’s work, could and should affect systemic change. We had the pleasure of meeting with Maynard in his Vancouver studio earlier this month, where he has been an artist in residence for almost 4 years.  Skwachay’s Lodge has for years had a thriving artist in residency program that has supported the careers of many talented Indigenous artists with their practice. Not just a residency program with artist accommodations and well equipped, large studios, Skwachay’s Lodge is also a sleek hotel inspired by Aboriginal arts and culture plus a super cool gallery and lounge.

With the pandemic however, the whole building has been underutilized with the hotel portion remaining closed for now and few Indigenous artists working from their studios, opting rather to work from more remote, less populated locations. Beginning his career almost three decades ago, Maynard Johnny Jr, is splitting his time between Chemainus and Vancouver’s Skwachay’s Lodge where he has continued his self-directed development of art-making by selling both through galleries and independently.

A strong, thoughtful voice on social platforms, Maynard shares suggestions, ideas, links and facts that empower and educate his growing audience of White and BIPOC art enthusiasts, collectors, fellow artists and designers alike. Recognizing his voice is a tool, Maynard is using it to empower, educate and unite us.

He is of Coast Salish descent on his father’s side from Penelakut Island and Kwakwaka’wakw descent on his mother’s side from We Wai Kai, Cape Mudge on Quadra Island. The most recognizable Indigenous aesthetic is that of the more northern nations, arguably that of the Haida, Tsimshian, Nisga’a and even Kwakwaka’wakw. The southern Coast Salish style has only been celebrated in recent decades, Maynard acknowledges in large part due to famous artist, Susan Point paving the way. This style is described by Maynard as being less symmetrical, more fluid but still with a strong emphasis on balance using shapes and colours. Taking that traditional style and being inspired by the young elementary school students he taught years ago, Maynard has used non-traditional bright, sometimes almost fluorescent colourways in the printing and painting of Coast Salish traditional imagery.